Trend channels are parallel lines that capture the price move of a wave pattern (figure 7.25). Most of the time Elliot waves of the same order can be isolated using trend channels. This is the case for impulse waves, zigzag correction waves, and triangles. If these patterns are not moving within a trend channel, it is likely that the Elliott count is wrong.

Price targets cannot only be set based on support and resistance lines, but also by using trend channels and Fibonacci projections. Remember that even the Elliott wave counts 5+3=8 are all Fibonacci numbers.
That is why all further wave subdivisions also are Fibonacci numbers. 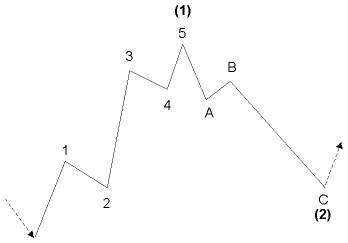 Even 100% retracement is possible and still complies with the Elliott rules. 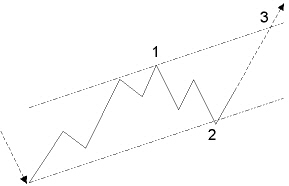 Looking at figure 7.28, once correction wave 2 is completed, you can draw an uptrend line from the start of wave 1 through the end of wave 2.

Next, you draw a parallel line with this trend line through the top of wave 1. Now you have a trend channel. The upper side of this channel is the first price target for wave 3.

If the price does not reach the upper side of this channel anymore, you probably are looking at a wave C, not a wave 3.

You should keep a horizontal support through the endpoint of wave 2. If the price falls through this level, wave 2 is not finished and will become more complex, and wave 3 has not yet started.

Impulse wave 3 often is the wave with the biggest move. So, usually, wave 3 will move up above the trend channel. In a rising impulse wave, it is common for the price to reach 161.8% of wave 1. In a falling impulse wave, wave 1 usually will reach 123.6%. 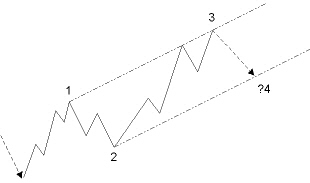 At the end of wave 3 in figure 7.29, you can draw a trend line through the tops of waves 1 and 3. Now draw a parallel line through the bottom of wave 2. You now have a trend channel of which the lower side is the primary target for wave 4. Not reaching the lower side of this channel probably means that there is a strong trend and that you are still in wave 3, or there is only a short wave 5 to be expected. 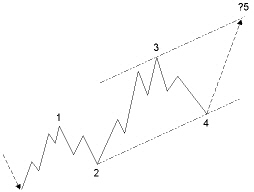 However, most of the time, this target will not be reached by wave 5, except when there are extensions in the making of wave 5, or when wave 3 was weak with just a moderate move.

Method 2
Usually, wave 3 has the highest acceleration compared to waves 1 and 5. 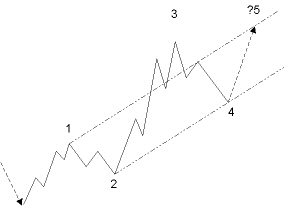 If wave 3 makes a bigger, sharp up-move like in figure 7.31, draw the basic trend line through the end of waves 2 and 4, but draw the parallel line through the top of wave 1.
This line will cross wave 3 and give a more moderate target for wave 5.

Price Target for Wave A

Price Target for Wave B

In figure 7.32, at the end of wave B,  draw a trend line through the beginning of wave A and the end of wave B.
You now can see a target for wave D, anticipating that a triangle correction is developing.

Price Target for a Double Zigzag 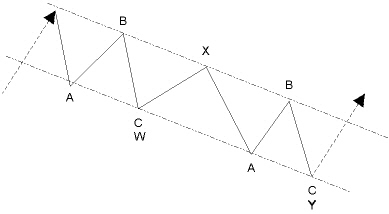 Drawing a price trend channel, it is a good idea to distinguish a double zigzag from an impulse wave (figure 7.33).
Both have about the same characteristics.
However, double zigzags fit almost perfect within the price channel. On the other hand, if it is a wave 3, remember that a wave 3 mostly will break this channel, being the bigger, more accelerating move.